This blog should recall chronologically my month to month journey through COVID-19. Today this approach doesn’t work. The present intrudes as my country comes undone.

Wednesday, January 6, 2021, marks the day the Capitol of the United States was stormed and defiled by President Trump supporters, shocking the nation. But why were we shocked? Trump stoked the fires of insurrection by sticking his racist verbiage into a long seething wound- inequality and purposelessness for the working classes of America. For decades, the rich and powerful have raped the United States of it’s capital, leaving millions without jobs or dignity. It’s the land of every man for himself. It’s also the land of the other, the other color, those of black, red, and brown skin who do the work and, yet, are seen as less, less than “me,” less than human.

America prides itself on being a democracy but that democracy’s foundation is racism. America boasts of being a “God fearing nation.” But the true God in America from the get go is money and power. Now that the money and power are in the hands of a very few, those at the bottom of the pyramid look for someone to blame, the other, and look for someone to lead them out of the muck and the mire. Just as in the thirties, citizens of Germany, Italy, and Spain looked for a way out. Fascism promised they were heard and would be rewarded as long as certain parts of society were blamed and eliminated. Trump promoted the same message to the unheard and the misinformed.

When I use this analysis with friends and family that those who breached the Capitol could be such people, unheard and desperate for a way out, I’m met with outrage. When I propose they were doing what many did, me included, in the sixties with sit-ins, with taking over universities, Columbia for example, more outrage. I know we didn’t have guns, I know we weren’t racists, but we were trying to be heard. If we want to prevent this country from falling apart, perhaps we should be listening and understanding their rage even if the reasons seem unfounded. I want to know why some of my family members voted for Trump, looked up to him, saw him as a savior, felt delegitimized.

I want to know how it feels to be the least heard of our population, people of color, the most injured of our citizens and, perhaps, the most resilient where for them every day is an assault, every day they can be overrun, every day is January 6th.

And yet here is what I wrote five months ago. Optimistic, naive, privileged?

I’m reading Ibram X. Kendi’s How to be an Anti-Racist with a friend of mine in response to the upheaval in the states.  Finally!  An unflinching look at structural racism and its participants.

It does seem as if the United States is on the brink of something, an awareness of micro and macro aggressions towards people of color, the sheer unfairness of being white. It could pass and we’ll go back to our old tricks or some of us wonder if a civil war of sorts is on the horizon.  I could image several countries emerging: the west coast, the northeast, the south, the midwest and the west.  Other than contemplating the disruptions, the dire economic situation, the deaths due to the virus, the madman in the White House, what can we do?  Just whine?  I’m unwilling to take the risk of going to any of the protests, so contributing money seems to be the only recourse.

In my never ending attempt to enter the world of fascism, to understand how it took hold, how people participated, were victimized or survived it, I been reading The Bookshop in Berlin by Francoise Frenkle which recounts her experience of owning a French bookstore in Berlin from 1921to 1939 whereupon, as a Jewish woman, she spent World War II escaping and avoiding the Nazi’s. She paints a vivid portrait of an unpredictable life for those who lived in Germany, Italy, and France. She describes everyday activities and deprivations almost like the times we live in now. Not knowing what to expect day to day, feeling the possibility of danger at any moment, thankful for those who takes risks so we can survive, and sometimes, dumbfounded by those who take advantage when they are afraid or hungry or both.

I’m getting used to being a hermit.  Right now I’m sitting in my back yard, birds singing, a gentle breeze wafting through the air.   Most days, this pleasure isn’t possible due to Jersey’s weather, sticky and humid.  Today, there is a battle amongst the avian species for space in the bird bath- cardinals versus grackles. The grackles, a much maligned bird, are winning: they’re seen as bullies. The cardinals retreat to nearby bushes. Then the grackles have it out with each other even pushing the young aside. With limited resources, they are forced to fight amongst themselves. Would more birdbaths work? My backyard world mirrors the problems facing my fellow citizens.

Ruth Bader Ginsburg died September 20th leaving a dark hole in the Supreme Court that can now be filled by another right wing judge of Trump’s choosing. What went into her decision to stay on the court through all her illnesses? If she had left early enough, could Obama have filled her place? Was she worried that he couldn’t?

Does my cat Milo, blind and in human years hitting 90, use the same reasoning? Does he figure, I won’t be able to replace him? 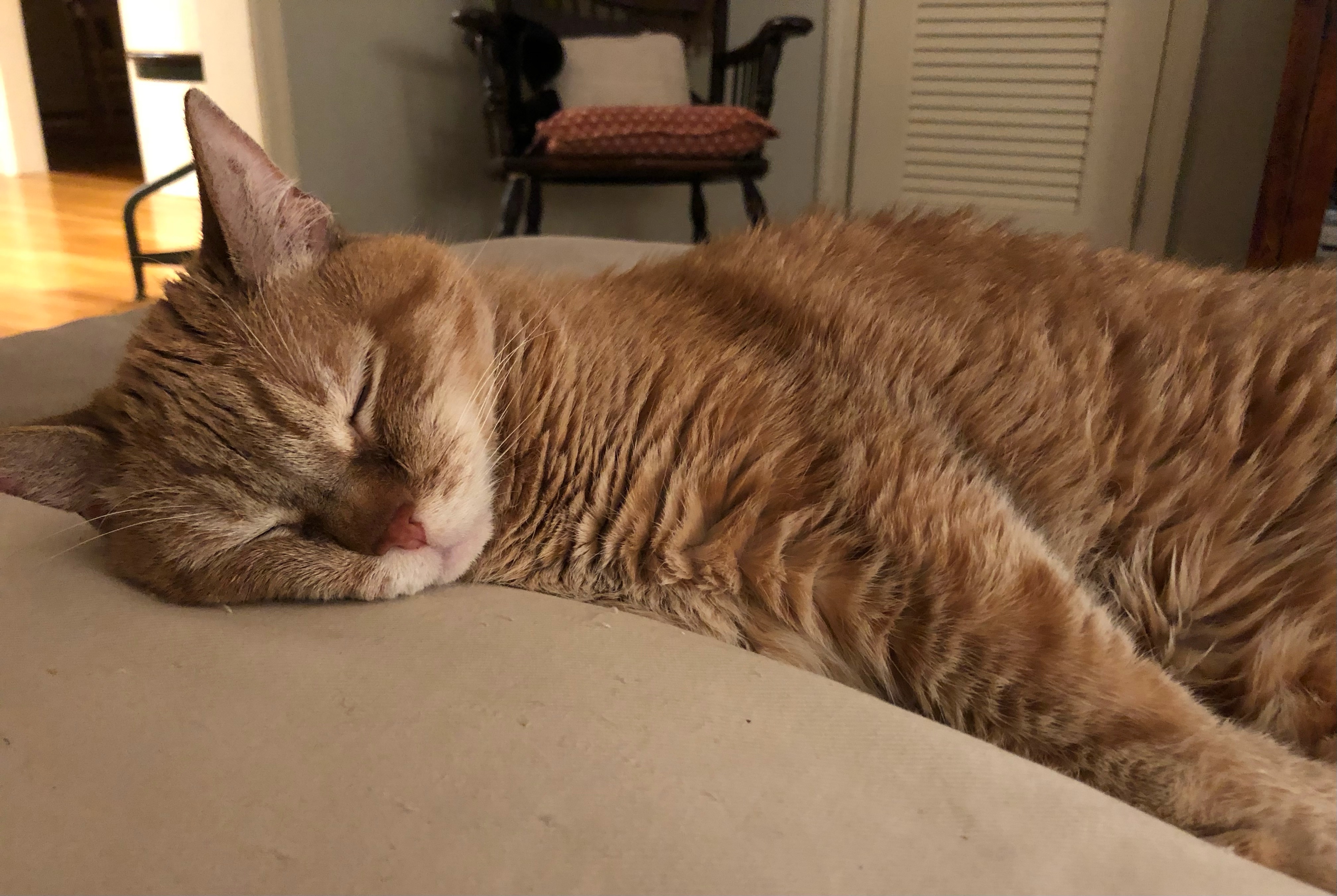