The next four days except for three hours of French at the Alliance Francaise were spent flaneuring with a friend visiting from Ireland.  Lunch took place at the Irish College in the residence’s hall: good cheese, radishes, olives, and bread.  Without plates and only one fork and knife, it was a tasty but messy affair.

She decided on a walk along Rue Mouffetard.  The day was cold and rainy calling for a stop at a cafe.  Ordinarily, my friend doesn’t smoke but Paris called her and at a tabac she purchased a pack.

As we had origianlly met in the south of France, a pastis seemed in order. I loved watching her smoke as we lingered over our Ricard’s.  Although I have never smoked, I have tried.  Seventeen years ago when I was about to go on to France for a sabbatical, I asked my husband to teach me.  For several hours, he lit up one after another but it didn’t take.  We even tried the small black cigars favored by Mme. Brenot.  No go. Yet the mystery of watching a smoker deep in its pleasure intrigues me.  For the next few days, that voyuerist pleasure was saited. 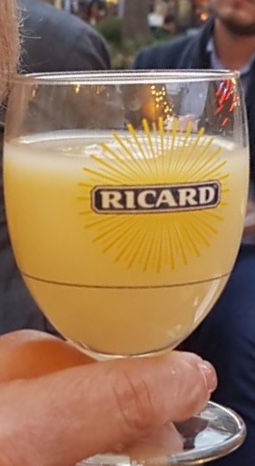 Michel and I walked all over the Latin Quarter.  We had cous cous spread out on newspapers.  He knows everyone at the restaurant.  Then to the Pantheon under an almost autumn sky.  Finally to Chausseurs on Rue Mouffetard, a tiny restaurant specializing in frites.  The waiter, a friend of Michel’s from Columbia, tells me, “You have the eyes of my country.”  I’m smitten with him, with Michel, with myself, with Paris.

Another day with the help of the painter from Toronto, we wandered up and down the narrow walkways in Belleville, stepping back to the 19th century.

From there , we traveled to Montmartre and discovered a small bookstore where the owner engaged in lively conversations with returning customers.  One shelf was devoted to Marguerite Duras.  I found her again. I selected a small book entitled La Malade de la Mort, which I interpreted to mean that death was like an illness and seemed in keeping with the theme of this trip.  I glanced at the first page and thought I might be able to understand a good part of the novel.  The accurate translation of the title is The Malady of Death. 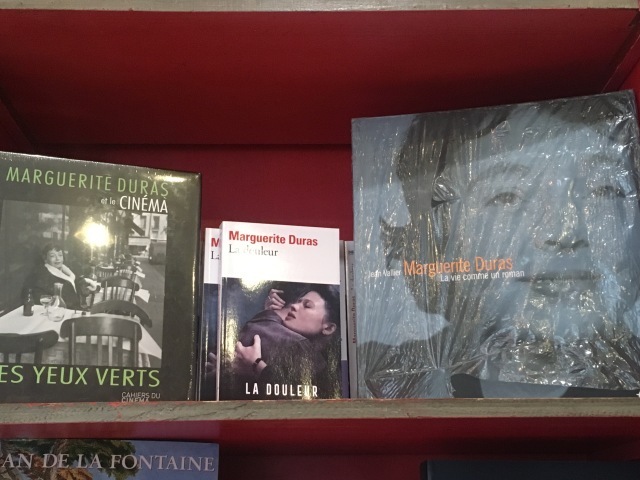 Later, I began making my way through the text.  When I got to “au hasard de ton sex dresse dan la nuit,” I realized I was in for some erotica.  The name of the publishing house made me wonder if there was a connection, Les Editions de Minuit or Midnight Editions.  However, Alain Robbe-Grillet was one of it’s founders.  The book, at least as far as I got, is a rumination on the sexual relationship between a man and a woman.  Sometimes, he likes to watch her sleep.

According to her biographer Laure Adler, writing this short novel gave her great joy while she drank 6-8 litres of wine a day.  “She was 68. She no longer had a man who wanted to teach her how to love, but she could image one.”

That night we went back to Rue Moufetard for moules frites and Sunday returned to Marche Bastille. Perhaps because it was Sunday, I couldn’t find the cheese monger with the special versions of raclette.  We settled for a creamy goat cheese and a delicious Mourir. Again, good olives from the same stand, a bunch of radishes, blood oranges, and a baguette. We took our lunch to the Seine descending from Pont D’Austerlitz.  Unable to finish our bounty, we left the bread for the pigeons.  Two men seated not far from us were astonished we didn’t eat it ourselves and when we told them the bread was for les oiseaux, they smiled in agreement.  We wondered if they wanted it for themselves. Sometimes, we can’t escape the ignorance of privalege. 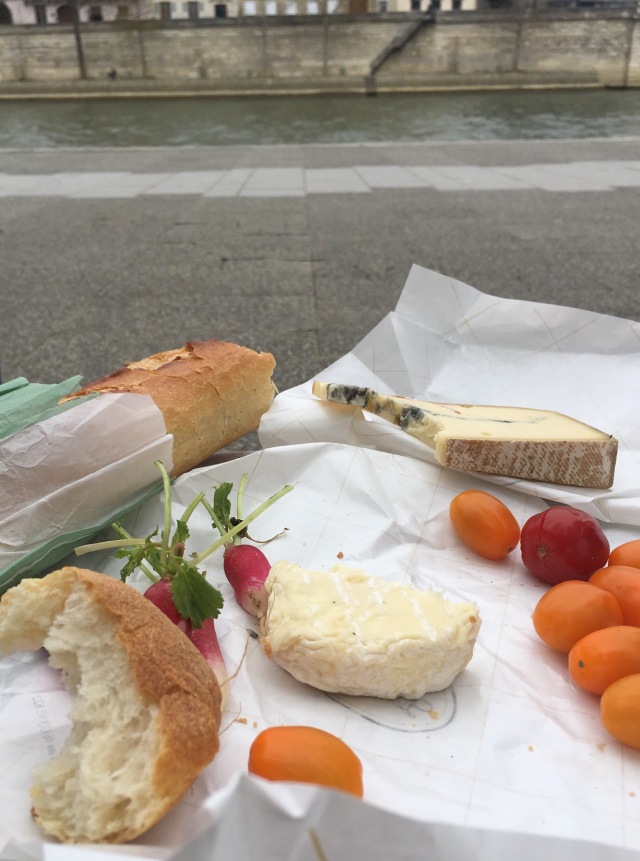 Monday, my first day at the Alliance, then a meander through the Jardin des Plantes, around the Marais, and to Place des Vosges where we came upon a tea emporium, Dammann Freres.  Along the shelves samples of tea leaves sat in small containers for sniffing: roses, bergamot, violet, a complete flower garden.   Then, coffee at Cafe Hugo.