The thought of the cod I had eaten the day before would haunt me later as I explored the history of St. Pierre.  But, the first order of business was a boat tour of the surrounding islands.  As we left the harbor, to our left was the L’Ile-aux-Marins described by Aurelie, the assistant at the hotel, as a living museum.  These islands comprise an archipelago: each one a series of rocky outcroppings topped with green vegetation and mostly inhabited by birds.  Although many species can be found in these islands, as we went around the uninhabited, Grand Colombier, I only spotted various seagulls. 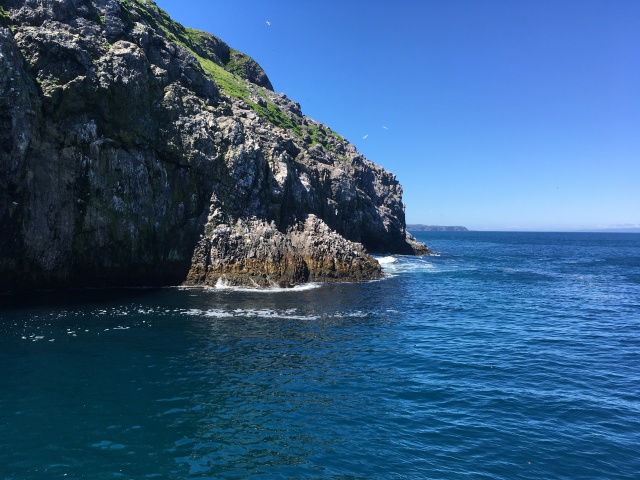 In my backyard and on my street in New Jersey, I can sometimes see deer wandering by, pushed from their own habitat, a tragic consequence of human development.  Here the birds don’t struggle against such outcomes: they have a home unburdened by development.  And like them, I was free and content, stunned by the natural beauty surrounding me.

This state of well being didn’t last.  After disembarking, I made my way to The Heritage Museum.  Trying unsuccessfully to communicate in French, the attendant saved me by speaking English and directed me to begin my visit upstairs.  The museum houses everyday objects from an earlier time in St. Pierre: a schoolroom, a chapel, a doctor’s office, a boathouse of sorts.  The light within the exhibits recreates the late 19th and early 20th century.  The final stop was a room filled with film equipment and a documentary on a loop that mostly bemoaned the changes in St. Pierre since the early 90’s when fishing cod became illegal.  A bustling seaport became a port without purpose.  Although some residents were hopeful that new projects, such as education and eco tourism, would work, some were doubtful that St. Pierre could remain viable as most young people must go to France or Canada to finish their education and many don’t return.

As I left the museum, I said to the young women who had sold me a ticket, “C’est triste” or that’s sad referring to the film.  She agreed with me. Now I understood why the two most popular restaurants are a throwback to the 90’s.  They are literally stuck.

However, the doubts about whether or not St. Pierre could remain populated became questionable before the day was over.  The hotel offered a tour of the island.  As we made our way west, new houses are going up everywhere in the area known as Savoyard, which originally was a small fishing village.  Pierre, who runs the hotel, said that young people were coming back and although the population between 6 and 7 thousand hadn’t increased, it hadn’t diminished either. 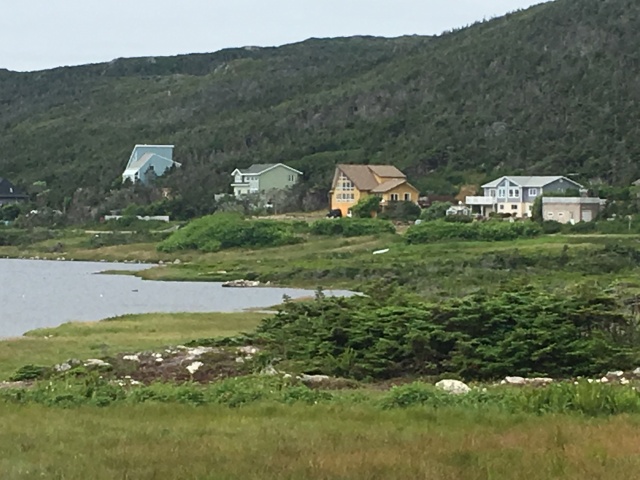