I had hoped to spend some time in Sydney, the western edge of Nova Scotia, but as I didn’t get to the hotel until 2 in the morning and my plane left 10 hours later, it was not to be.

On my way to the airport, I did get to some insight into Sydney after jawing with my cab driver.  There is still commercial fishing although it has been in decline due to the 1992 Canadian government ban on cod fishing. Other sources of income are tourism and education given the presence of the University of Cape Breton.

Global warming features into this small portrait of Sydney.  Once a fisherman himself, he told me there hadn’t been any ice fishing for a few years because there hadn’t been enough ice.  Ice-skating had been a pastime every winter but no longer.  He lamented the absence of growlers, small icebergs that show up in the harbor for several months every winter. As he said, “And this is an open harbor.” Adding tongue in cheek, “No, there isn’t any global warming.”

My adventure continued with the first sight of the Air Saint-Pierre plane that would take me to the island- a propjet with 8 seats. Rain and fog didn’t bode well for my piece of mind.  As I looked across the tarmac at the small plane and young pilot, I felt in a time warp- the closing scene of the film, Casablanca. “I’ll always have New Jersey” offered no comfort.  Nevertheless, the ride and landing exceeded my expectations, safe and smooth.

My hotel, Auberge Sainte-Pierre, reminded me of small hotels in France, modest but comfortable. However, here, the staff are exceeding helpful. Immediately, Aurèlie, an assistant at the hotel, recommended she make a dinner reservation for me. And they gave me a room with a view over looking rooftops to the harbor and a complimentary bottle of wine. This might be a better version of France. 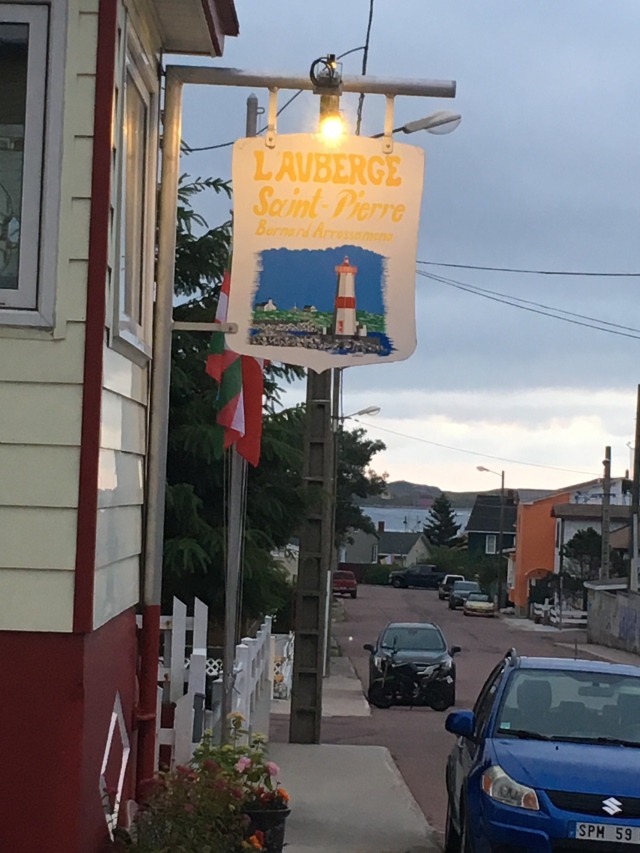 Tired from lack of sleep, I napped and at 7 made my way to the restaurant. Considering Aurélie’s recent return to St. Pierre after years of being educated and working in Paris, I wondered about such a significant life change. St. Pierre’s population is just under 6,000 and only 26 square kilometers, and, as I found out, limited to just a few restaurants.

The hotel sits on the northern end of the town and on a considerable hill. The walk to the restaurant was easy; coming back would be a workout. I had imagined an island that would visually resemble France. It doesn’t but did remind me of a frontier town with wooden houses built smack up against each other and little consistent style. Later, I learned that much of St. Pierre had burned down several times, yet the citizens insisted on having wooden abodes. They are built close to each other for protection against the elements, and many homeowners build the house themselves.

The restaurant’s, Le Feu de Briase, décor is stuck in the 90’s: a consequence of the cod ban, which devastated the island’s economy. Nevertheless, the wine list impressed, as did the food, this night, cod. It can still be fished in small amounts and only sold in the area.

The waiters danced between customers. The flirtation between diner and server eliminated any difference in status.  Who is higher on the social ladder?  I give it to the waiters.  If my French were better, perhaps, I, too, could make jokes, maybe even be charming for a minute or two. Tant pis, too bad. Nevertheless, I had a good meal with good wine after almost 24 hours of straight travel.

As I often did in whenever visiting Aix-en-Provence, I began with a Ricard accompanied by the local fois gras with rhubarb compote.  Delicieux.  Then, there was cod, my first in many years.

Before returning to the hotel,  I took a brief walk into the town.  Located around a charming port, the city center of St. Pierre faces the harbor and the picturesque island of L’ile-aux-Marins, its brightly colored houses strung like a necklace around the stark landscape. A few blocks north at the end of Boulevard Constance Colmay, a lighthouse reached by a rocky jetty fills the sky as the sun sets.

Although afternoon rain had obscured the view of the harbor, by evening, its beauty was revealed. 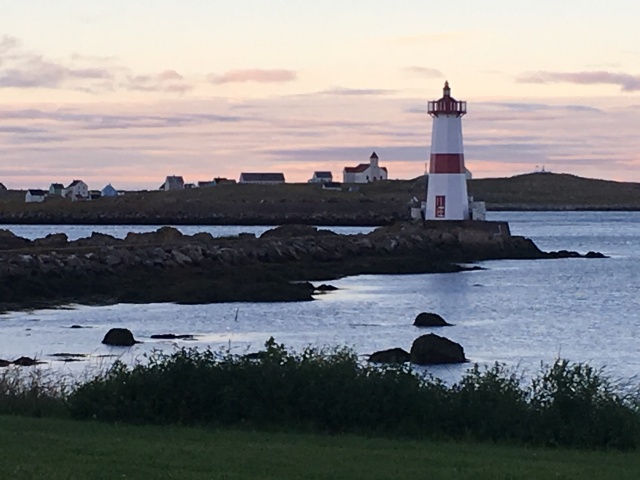