On my way to buy gifts at Bon Marché, still trying to trace Mayotte Capecia’s life in Paris, I strolled along Rue Mayet where she had lived with her sister in 1947.  The small street runs between Rue de Sevres where Bon Marché is located and Rue du Cherche-Midi, I didn’t know the number so I used my imagination to guess where she might have hung her hat.  Could one of these have been her building? 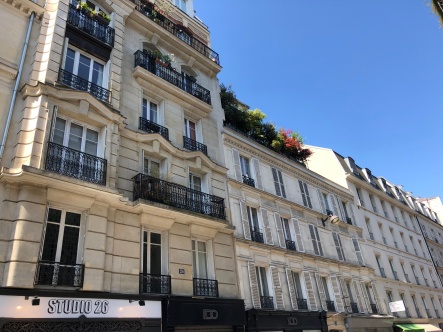 I’m anxious to buy an important birthday gift for an interesting four year old.  Last year, I discovered that Bon Marché replaced their extraordinary notions department on the top floor with an equally extraordinary children’s department.  Another disappointment.  The department pour les enfants has been drastically reduced.  As I told a salesperson, “C’est dommage,” that’s a shame.  Nevertheless, I manage to spend over 50 Euros.  After dropping more money at Zara’s located across the street, it was time to make my way home.  Back on Rue du Cherche-Midi, I passed Le Nemrod and stop for lunch.  I should have done more of this: sit outside with a delicious salad, a glass of rose, and watch the French go by. 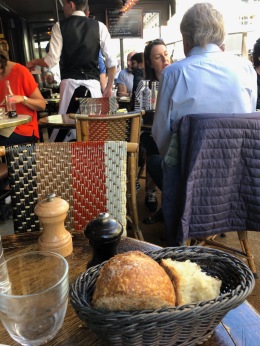 On my back through the Jardin du Luxembourg, a young man approached me and said in French how beautiful “it” is.  Assuming he was referring to the espaliered apple trees we were next to, I readily agreed.  He realized that I was an American and continued in English, making niceties as we strolled together. 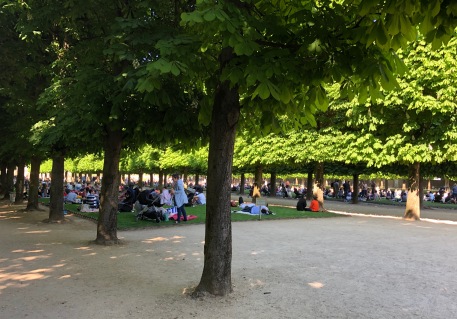 He suggested we exchange phone numbers.  I declined, graciously, I hope, and he wandered away unsuccessful at snagging  what he may of thought was a woman of a certain age with a comfortable income.  Is this a Jean Rhys moment from the pages of her novel, Good Morning Midnight?  In the evening, her protagonist, having returned to Paris after years away, wanders up the Boulevard Saint Michel confronting her age, her older status.  And like me this is a location where she has walked often.  Two men approach her and one asks, “Pourquoi etes-vous si triste?”  Why are you so sad?  She tells them she’s not sad although she admits to herself she is:

”Yes, I am sad, sad as a circus-lioness, sad as an eagle without wings, sad as a violin with only one string and that one broken, sad as a woman who is growing old.”

Because she discovers they are Russian, she accepts their offer for a drink.  Is she braver than me, sadder than me, less cynical?

I arrive back at the Centre Culturel Irlandais by late afternoon.  It’s cooled off and the courtyard is almost empty.  A good time to write, to consider answers to those questions. 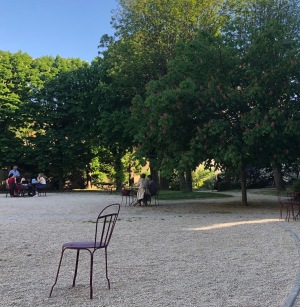 It’s Easter Sunday and Jean Rhys is still with me.  Parallel walks, parallel observations.  In the novel, she describes an earlier time in Paris when the protagonist worked in a dress shop, and got off the metro at Rond Point at 8:30 every morning just as I had years ago hawking newspapers.  Her character Sophie must face the dilemma of Sunday in Paris.  “…Sunday – a difficult day anywhere.  Sombre dimanche….”

I feel compelled to go to La Brasserie de L’Isle Saint-Louis for lunch.  I’ve sent people here for supposedly the best sauerkraut in Paris.  In order to get there, I had to negotiate every inch of Pont de Tournelle as hundreds crowded the bridge to photo the blackened Notre Dame.  Hot and sweaty, it was seventy-six degrees, I managed to get a seat on the terrace overlooking the Seine.  When I ordered choucroute garni, the waiter asked if I was sure that is what I wanted, a dish piled high with different cuts of ham, sauerkraut, and potatoes.  I wondered myself.  An odd choice for a hot April day,  But I stubbornly proceeded.  I like it but ate only half. 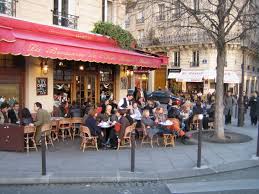 After a stroll around the L’Isle Saint Louis and some ice cream I noticed crowds forming by the Pont L’Archeveche and watched an enchanting escape from the charred remains of Notre Dame fully in view.  A group of professional skaters lifted spirits as they graciously danced along the bridge.