“Going down into the low tide world,”

Always Rachel, The Letters of Rachel Carson and Dorothy Freeman

I am in her house, but not in her world.  I can see the body of water, the Sheepscot River that eventually reaches the sea, but I can not touch it.  This morning, my first morning, I walked along the path that leads to the shore but could go no further than the long ledge of rocks that line the coast, slippery and dangerous. 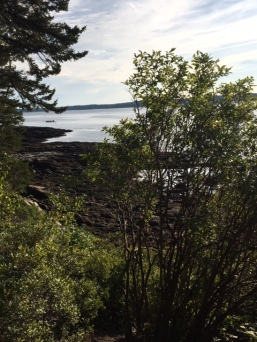 When Carson first moved to Southport, Maine, she had a note from a neighbor, Dorothy Freeman, welcoming her.  She invited Dorothy and her husband to a Sunday exploration of the very coastline that challenges me.

After a friendship developed between the two women, Carson wrote to Dorothy that she wanted to preserve the forest off Dogfish Head Road which extends north to the tip of a peninsula of the same name.  It’s the site of an early settlement as well as the port where steam boats carried summer guests to Southport.  Dorothy was one of those early visitors, traveling by steamer from Boston to Southport when she was just an infant.

The act of preserving was imperative to Carson.  But as Linda Lear (a Carson biographer) explains, ”She also wanted to preserve the paths these two friends had lovingly tread.”  Carson called them the “Lost Woods.”  I walked along the path that seems to lead to those woodlands, but it went nowhere; instead, I saw only houses.  So the woods are lost.  I’m saddened.   A contradiction as I’m sharing her very house with my two loving friends, Karen and Iris.

Karen and I rose early.  She is reading the Sea Around Us, Carson’s poetic and scientific portrait of the sea, and I’m reading Always Rachel, a present from Karen. I began to peruse the book, looking for links to my stay and read aloud those first few entries hoping to inspire our outings.  Karen also explored the grounds and, like me, reached only the top of the rocky shelf.  But she feels confident we can make our way if we do it together, much like Rachel and Dorothy did on that first meeting.

We have a hard time getting out of the house, so much to share, to review.  I worry that I won’t be looking for Rachel.

Today, we visited monarchs at the Costal Maine Botantical Gardens in Boothbay.  A guide in the Butterfly House told us that the staff knows when the Monarchs will migrate: then, they lift the screened roof and the monarchs make their journey to Mexico. This guide was particularly fond of the Mourning Cloak butterfly: it doesn’t migrate but toughs out the winter in Maine, making its home in an oak tree, then, in the Spring, climbs down the trunk to drink it’s sap.

Tomorrow is Labor Day and we will look for Rachel at the Newagen Inn which she visited for the last time on another Labor Day watching Monarchs fill the air.  My worries were unfounded- a serendipitous link to Rachel.