I leave in two days, so I decided on a last visit to market Marché d’Aligre, in search of the raclette cheesemonger: he had many versions including one infused with spring garlic from a Swiss meadow.  Afterwards, I planned to make my way to the Ménagerie du Jardin des Plantes in search of the panther of Rilke fame and mentioned by my friend the poet shortly before he left.

Although this was my third visit to the market, it still overwhelmed.  I perused the “antiques,” more like a large garage sale, in search of faux ivory cutlery.  Found them but too expensive. A decision I would later regret.

Alas, the cheesemonger was closed.  However, the aroma of an Algerian bakery, Amira, seduced me.  I purchased a mihajeb aux légumes, a semolina bread filled with roasted vegetables, greasy and delicious.

Returning to the left bank, I crossed the Pont d’Austerlitz, entered the Jardin des Plantes, and meandered towards the Ménagerie.  Unable to tolerate animals in cages no matter how attractive the cage, I hadn’t been to a zoo in decades.

At the entrance, school groups and families entered with me.  I watched them oohing and aahing at the various animals and wondered what they were learning.  That viewing animals was for their entertainment?  That humans have the right to inprison them for our benefit?  Nothing about animal life, nothing about respecting them.

On my way to La Fauverie or the cat house, I passed antelopes whose only outside environment resembled a large kitty litter box, hard dirt with no greenery.  Does that make it easier to clean?

As I neared La Fauverie , I passed vultures.  I felt like one as I devoured images of exotic animals, but unlike them, I had the freedom to move about. 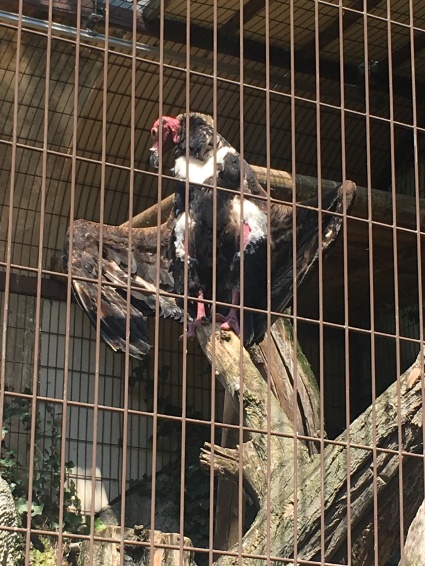 The leopards have an old fashioned indoor cage, but they can escape to the “outside” a large glassed in area where they pace or climb rocks to a door that goes back inside. However, it seemed to be locked. They were on display for our amazement.

His vision, from the constantly passing bars,

has grown so weary that it cannot hold

anything else.  It seems to him there are

a thousand bars; and behind the bars, no world.

On my way home I passed a poster announcing a Chris Marker exposition, Les 7 Vies D’un Cinéaste, distracting me briefly from the panther.  Then his film, La Jetée, where there is no escape, came to mind.

Perhaps my view of the Pantheon as I reached the top of Rue Soufflot might provide a refuge.