Another day when we don’t leave the house until noon.  Sixty-five years ago, September 3, 1953, Rachel wrote to Dorothy advising her to bring old sneakers for exploring the low tide at the bottom of this house.  We won’t go wading today, but we will do a bit of exploring: Cozy Harbor, Newagen Inn, and Hendricks Head Beach.

We make a left onto Salt Pond Road, then, a left onto Dogfish Head Road looking for what Rachel hoped to preserve, what she and Dorothy called their “lost woods.“  After a few turns, we happened upon the Freeman cottage that Dorothy visited every summer for most of her life.  We were unable to see a way down to the shore where she and Rachel had spent many happy hours.  How cheered I am by this discovery, this tie to Rachel.

“The day of high wind I explored the shore and adjacent woods from Daniel’s place north for a short distance.  If only that could be kept always just as it is. ….How many acres would you guess are in the land from Daniel’s road north to where the Head cottages begin, and between the Dogfish Head Road and the Bay?  Just for fun tell me what you think, and let’s pretend we could somehow create a sanctuary there…. Where people like us could go… and walk about , and get what they need.”

Next, we ventured to Cozy Harbor that sits on one of the inlets of the Sheepscot River south of Rachel’s house.   Looking out to the water, on the right is the Yacht Club and on the left is Oliver’s, a restaurant.

With my own old sneakers, I wander down to the dock to see what might be living amongst the rocks.  Her biography and letters to Dorothy captures her delight in all creatures and plants that inhabit salt water.   Like her, I’m intrigued by what is in front of me: she still influences her readers.  Unlike her, I haven’t a clue what I’m looking at.

What did she see when she visited this spot when Oliver’s was the E.W. Pratts General Store?  She wrote to Dorothy on another Labor Day, September 2 1958 about a visit to nearby Pratt Island. 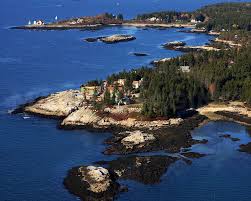 “…I walked through the woods to the place you and I sat that last day.”  She goes on to share the birds she has sighted- semipalmated plovers and turnstones.

Next we drove to the Newagen Inn located at the southern tip of Southport and described as one of her favorite places.  The inn seems so modern: I can’t imagine her visiting.  On the terrace, we had a late lunch looking out towards the Atlantic. 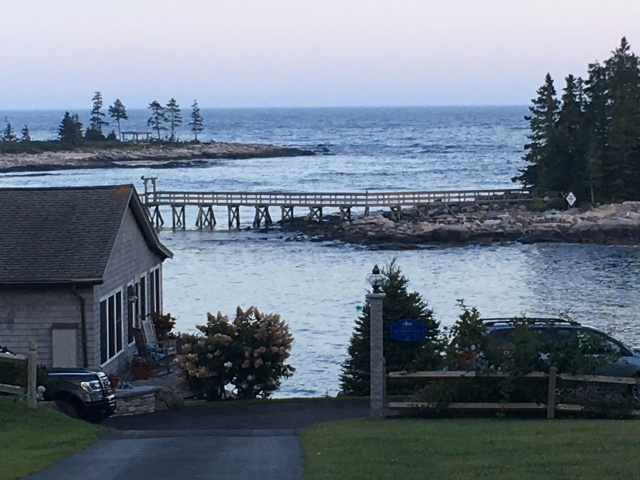 After our meal we asked the receptionist if she knew where Rachel Carson and Dorothy Freeman would spend time.  She directed us to a narrow path leading through a patch of woods to the river.  There on a rock were two occupied adirondeck chairs.

From a letter to Dorothy, September 10 1963 on their morning at the Newagen Inn,

“For me it was one of the loveliest of summer’s hours, and all the details will remain in my memory: that blue September sky, the sounds of wind in the spruces and surf on the rocks, the gulls busy with their foraging, alighting with deliberate grace, the distant view of Griffiths Head and Todd Point, today so clearly etched…. But most of all I shall remember the Monarchs, that unhurried westward drift of one small winged form after another, each drawn by some invisible force.”

We took the long way around to the house which meant passing Hendricks Head Beach.   There were children exploring the waters, nets in hand, catching crabs.  But loss seems to have followed us: a dead baby seal had washed up on shore.   The beauty of the site, the children’s interest in the creatures of the sea, and the loss of one of it’s own made for conflicting emotions.  Would Rachel understand it is all part of the wonder of sea life or would she start to wonder what had gone wrong?